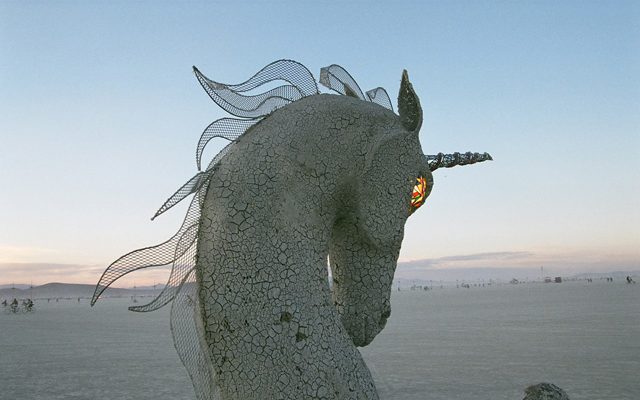 One thing I derive great satisfaction in is life-sized, or should I say, over-sized, art. A creature that you with which you can interact. Here are a few of my very large horse sculptures, and their mythological cousins of unicorn, pegasus, and hippocampus (seahorse), along with hospital commissions including a turtle and dolphins. These have been publicly on display at many events including Burning Man and some are on permanent display. I love working with bright colors to make this interactive art even more fun to spend time with.

This unicorn emerged before the surge in popularity of the mythic unicorn over the past decade, I may even be so bold as to say that with an audience of 60,000 at the event in 2005 where it debuted, that it helped usher in the unicorn craze all over again. Apparently it was mind blowing to many at the time, as I heard commentary for 10 hours straight while mudding, from countless passerby, perplexed that anyone in their right mind would make a 10 foot high unicorn, period. Even for Burning Man it was nutty:

An older but no less treasured piece is the giant seahorse:

Inspired by my underwater creatures, I took a couple commissions for hospitals, creating fantastic creatures for their lobbies. One is a large sea turtle, named for the Hawaiian goddess who protects children and disguises herself as a turtle, and the other a pod of dolphins:

One of my original horse sculptures was the Pegasus, which is either flying out of the ground or sinking into it, depending who you are talking to, their mood, state of mind, and whether they tend to see the glass is half full or half empty:

The beginnings of making large wild art: the Pegasus

The one that came after was terrific fun out of bones I’d found, plus made many of the bones, to complete the piece. It was very popular on Halloween:

Not to leave out my first life sized horse piece, a head that hangs on the wall. With its title is a spin on the old fairytale of the princess who is duped by her handmaiden, and whose talking horse gets its head cut off. He remains her only trusted friend even in his death:

Not exactly large art, but tucking this one in here as one of the original favorite dream-inspired creatures:

I hope you enjoyed this little tour.  There’s more on the way. I do accept commissions and make sculptures for outdoor use as well as indoor.